Modi epitomises what the other idea of India could look like

With his provocative comments, he is exacerbating the underlying prejudice against Indian Muslims 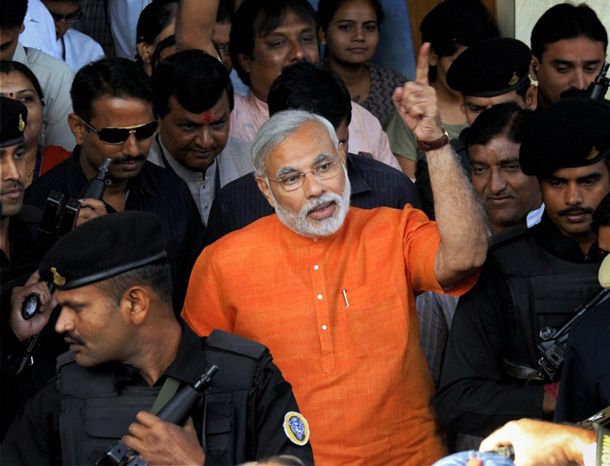 Thomas Macaulay once famously described India as the “strangest of all political anomalies”. He may not have said that in the spirit of admiration it deserved but he wasn’t off the mark. Even 66 years after Independence, India continues to be that: a strange political anomaly: a miracle idea rather than a commonplace nation.

Ordinarily, nations form themselves around majoritarian impulses: either of religion, ethnicity or language. But unlike every other nation in the world, India dared to base its nationhood on the idea of plurality rather than homogeneity. It dared to believe it could transform itself overnight from a poor, feudal, illiterate, colonised society into a modern, progressive, liberal nation, with equal rights for all its citizens, and an avowed commitment to social justice. One only has to think of the continuing struggles of other post-colonial societies and recent emerging democracies to remind oneself just how miraculous the idea of India is.

But by no means is that idea a settled one. The fact is, India could as easily have conceived itself as another kind of nation. Lashed together by the idea of religious dominance rather than coexistence. And constantly vulnerable to the intensely divisive forces this would inevitably have unleashed. There is every possibility this version of India would not have survived 66 years without falling apart. But its temptation persists. The miracle of India therefore — the idea of unity in diversity — can endure only if one displays both a poetic and pragmatic commitment to it. It’s an idea that needs constant reiteration and reinforcement. Events this past week once again is proof of that.

The angry controversy over Gujarat Chief Minister Narendra Modi evoking the accidental death of a “kutte ka bachcha” in the context of the horrific killing of Muslims under his watch in 2002; his assertion of being a “Hindu nationalist” and his mockery of the Congress as a party that hides behind the “burqa of secularism” is a symptom of this continuing faultline. Those who speak against Modi and his positions are automatically billed by his supporters as “Muslim lovers” and sycophants of the Congress. But that is a peculiarly blinkered view. Opposition to Modi does not equal a devotion to the Congress or blindness to its frailties. Nor is this merely about the competitive politics between two parties. The dismay about Modi taps far deeper.

It is a clash between two essential ideas of India. Modi epitomises what that other idea of India could look like. This image is intensified by the toxic armies who defend him on social media. To voice a contrary view on him is to invite not reasoned argument but an ugly, atavistic hate that is unparallelled. A barrage of lies, insults and vile misogynistic and religious abuse; an intellectual mindset that equates Kandahar’s terrorists with an entire community. The Taliban with the Indian Muslim. The trouble is, when Modi speaks of “hum paanch, hamare pachees”, and mocks the “burqa of secularism”, he knows he’s giving gleeful voice to this constituency. That is what makes him such a dangerously polarising figure in Indian politics. That is what drives opposition to him.

As this tussle for India’s soul continues, it’s important to remember that one can never be vigilant enough. There are some in the media who feel too much is made of the majority-minority debate. But scratch just the skin of things, and the unfinished project of India becomes apparent. The truth is, Muslims in India still find it hard to find jobs, rent homes, get equal access. It is true both the inwardness of the community itself and the Congress — as the party that has been in the saddle for maximum number of years — have much to answer for. But the underlying prejudice is terribly daunting.

Senior Editor Rana Ayyub has been having a close taste of this in recent weeks. Over the past three years, Rana — one of TEHELKA’s most sterling and fearless journalists — has doggedly chased the story of fake encounters in Gujarat. Her journalism has been driven by a keen sense of justice and constitutional values. Yet, as her scoops on the Ishrat Jahan case began to make national headlines, she has had to face the humiliating experience of being assessed not as a professional but as a “Muslim journalist”. Equally dismaying, a despicable slander campaign has been unleashed against her — shadowy whispers about a CD involving her and CBI officers that have absolutely no basis in truth.

India is an imperfect experiment. But if we abandon the poetic idea that underpins it, this is what we will get: “Hindu nationalists”, “Muslim journalists”, and women professionals we try to defang with scurrilous lies.